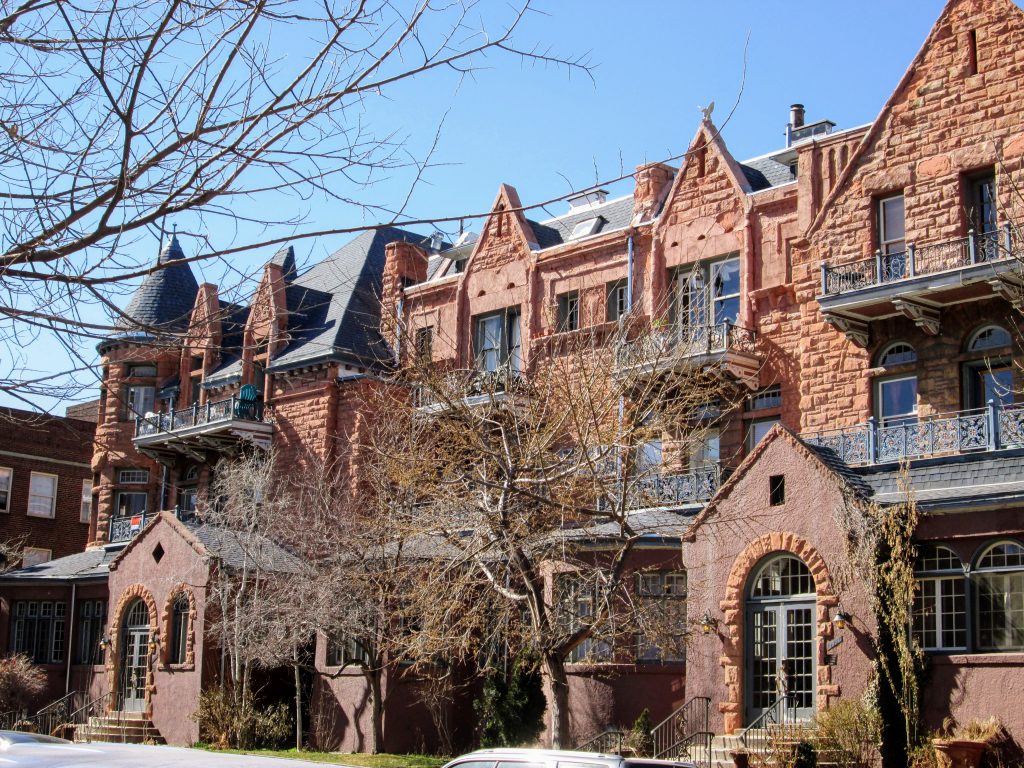 The Quality Hill Historic District in Denver’s Capitol Hill neighborhood is filled with giant mansions, historic apartment buildings, mansions-turned-apartments, and single-family homes. You’ll find beauty on every block during this 2-mile urban hike up and down the streets of Quality Hill in Capitol Hill. Built in the late 1800′s and early 1900′s, Capitol Hill was home to some of the wealthiest settlers in Denver. The Quality Hill District within Capitol Hill is only one block wide from 9th to 10th Avenues and stretches from Logan St. east to the Washington/Clarkson St. alley.

This walk takes you through parts of Quality Hill while keeping within the Capitol Hill neighborhood. And bonus: trees! This is a great walk in the summer for shade, in the fall for color, and in the winter to see architecture.

Need some good walking shoes? I get mine from REI because I love their return policy. 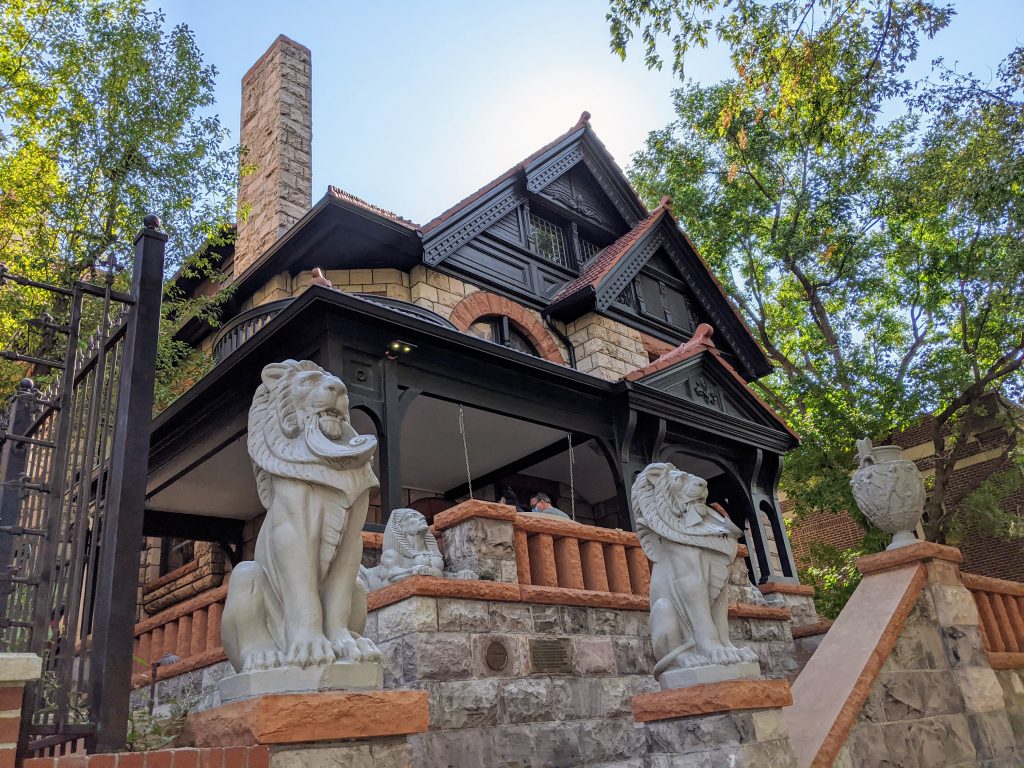 You’ll start the walk at the historic Molly Brown house (1340 Pennsylvania). A place to spend a few bucks where you’ll be richly rewarded with a good tour, you can also just enjoy the outside of the home. Molly Brown, who notoriously survived the sinking of the Titanic and also survived the shunning of Denver’s society, lived here with her husband. They bought the William Lang-designed home for $30000 from the Larges. Its Queen Anne style architecture has mostly stayed intact despite the home becoming a boarding house, deteriorating, and finally, being restored.

Stop by Pablo’s Coffee for a treat as you head south down Pennsylvania St. 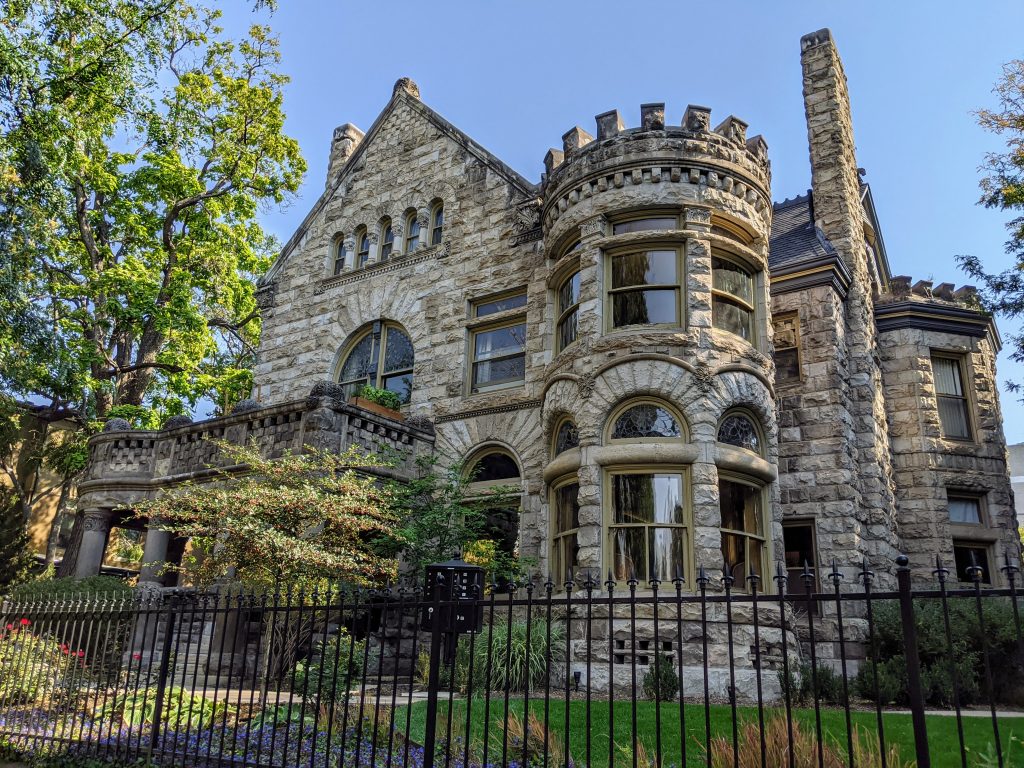 Another William Lang-designed home at 1200 Pennsylvania, this 1889 Romanesque Revival housed the real estate entrepreneur, Walter Dunning. He sold it to Mitchell Benedict and his family. Benedict served as the city attorney, helped design the state capitol, and had a hand in the creation of Riverside cemetery. It was turned into apartments in the early 1900s and has since been restored. 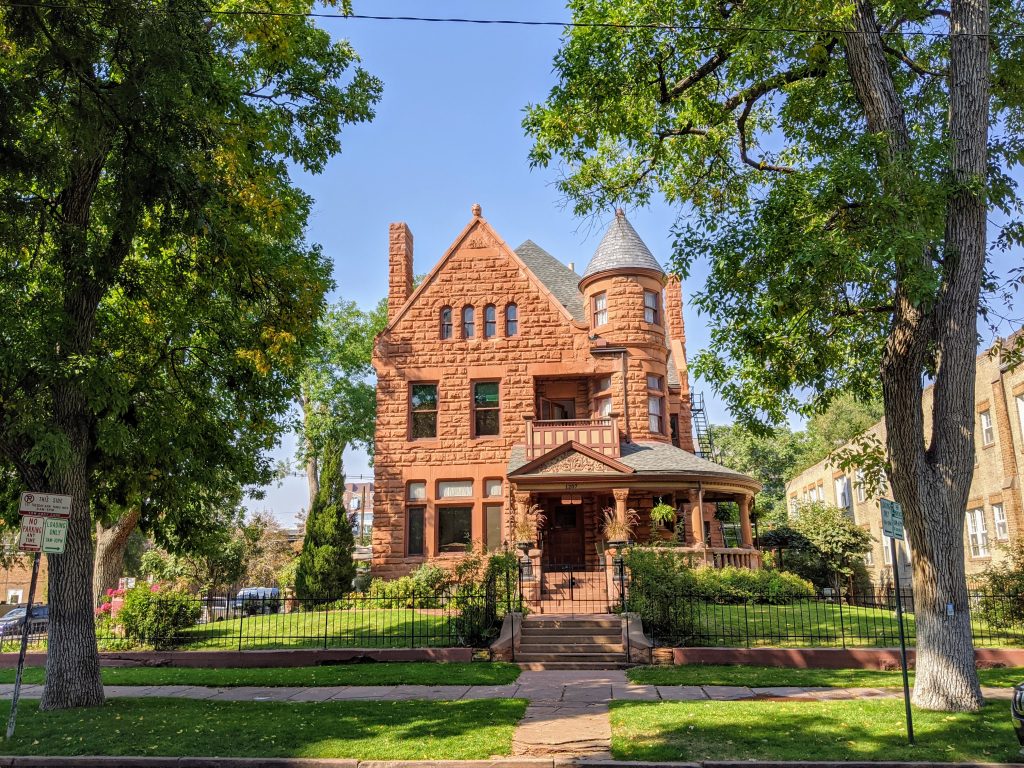 Previously known as the Keating House, this 1891 mansion was designed by Rieche, Carter, and Smith at 1207 Pennsylvania. The Keatings dabbled in many businesses; most noticeably Jeffrey Keating founded the McPhee and McGinnity Lumber Company. You can read an extensive history of this house and the lots it sits on by exploring the Inn’s website. 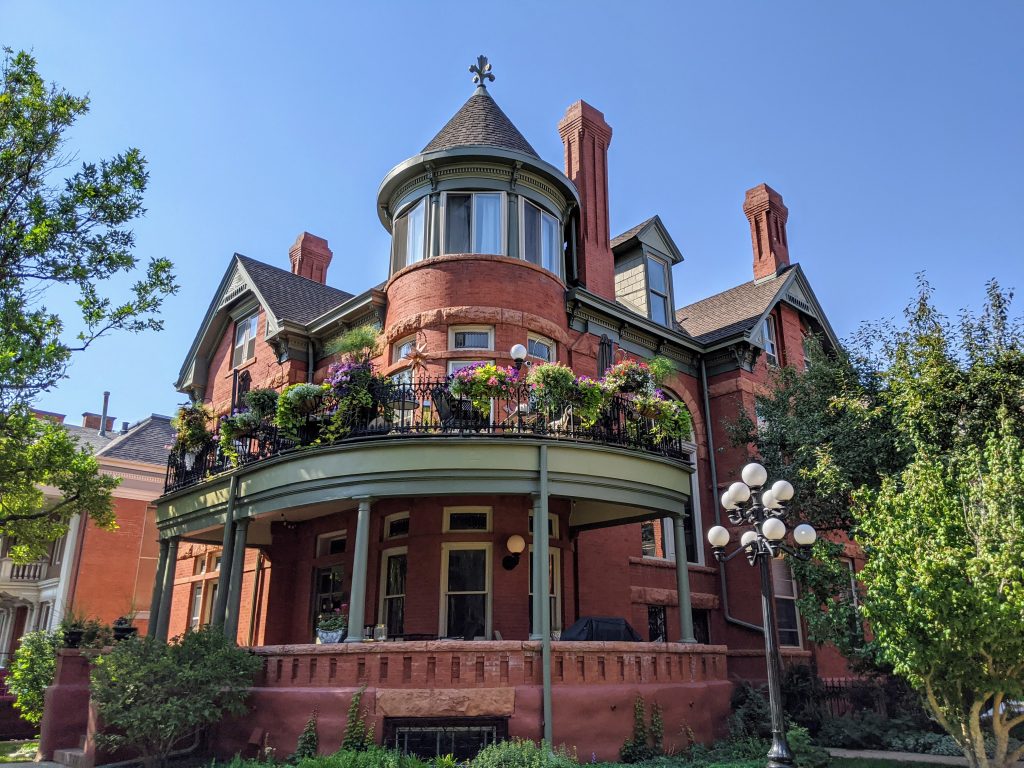 Spreading almost the entire block at 1165 Pennsylvania, real estate developer David Dodge and his wife, Nannie,  built the first mansion at 1173 Pennsylvania St in 1889. Their friend, Joseph Gilluly, treasurer of the Denver & Rio Grande Railroad, built its twin at 1143 Pennsylvania St. In 1927, Dr. John Henry Tilden purchased both mansions and added the joining wing, turning the entire complex into a tuberculosis home for folks flocking to Denver to take advantage of its sunny, clean air for recovery. 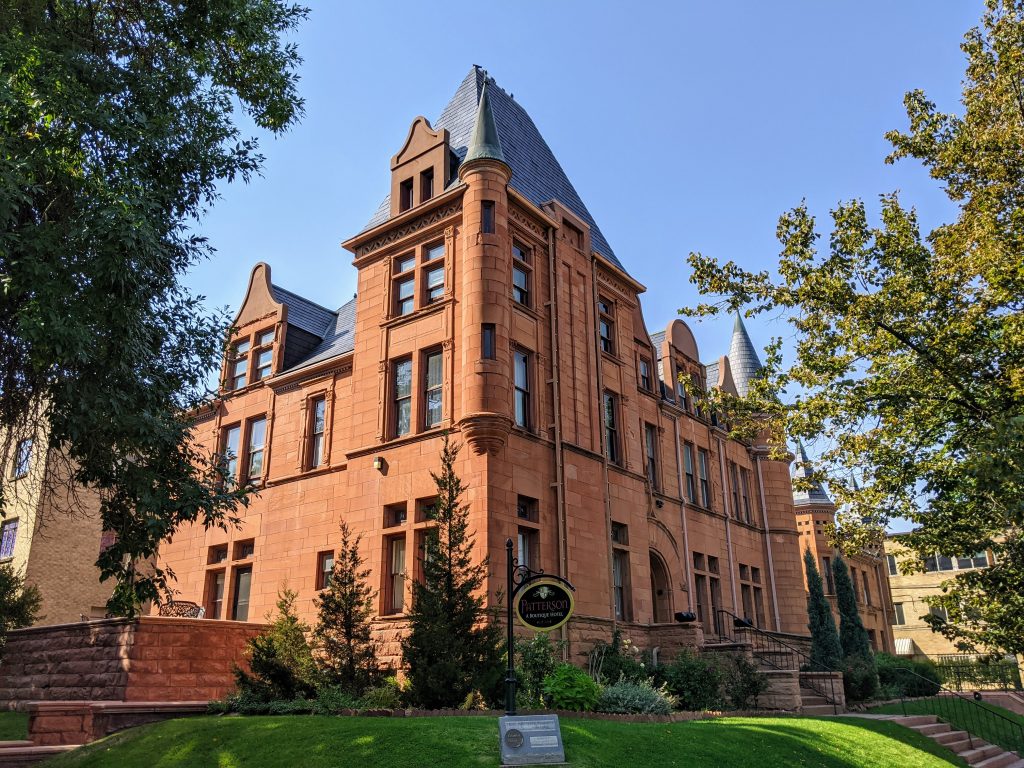 Constructed in 1891, this Manitou sandstone Chateauesque building known as the Croke Patterson Campbell Mansion now serves as a boutique hotel. Thomas Croke, an experimental plant breeder, served as a Colorado state senator. He sold the property to Thomas Patterson who also served the public in many elected positions. He published the Rocky Mountain News. His daughter married Richard C Campbell, a financial leader, who lived with his wife and father-in-law in the home until 1916.

As you continue south down Pennsylvania, you’ll pass the small Quality Park. Make your way to the block between 7th and 8th. 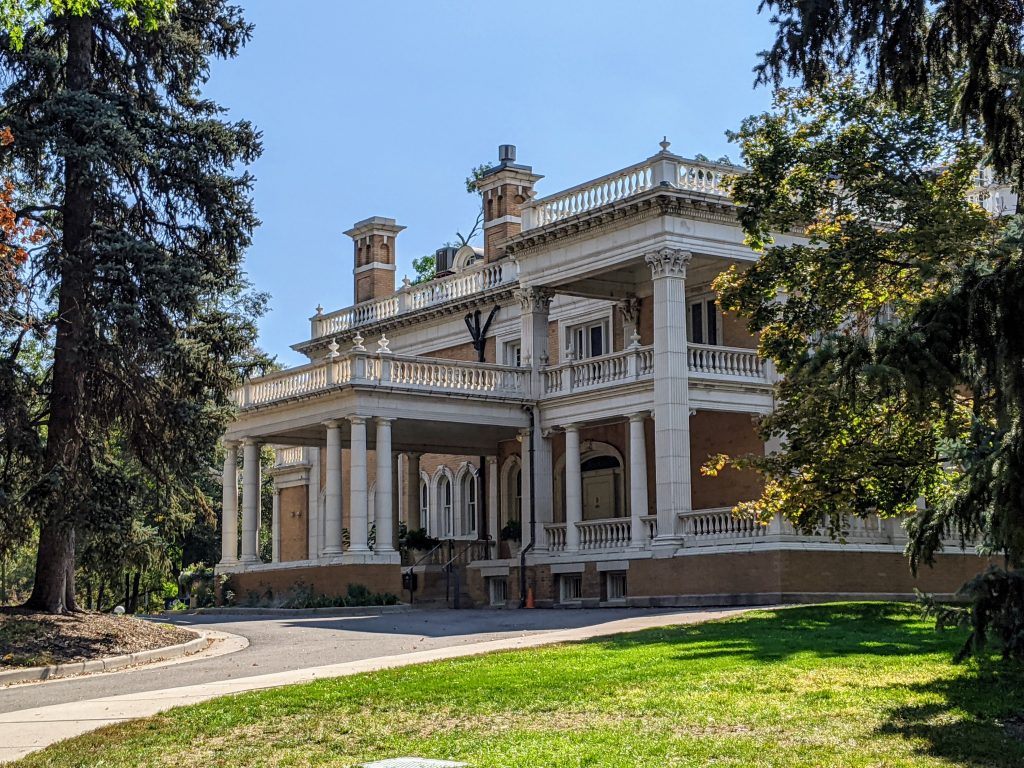 The Grant-Humphrey Mansion at 770 Pennsylvania St, named after the two families who lived there, was built in 1902 in the neoclassical style. Grant made his money in the smelting industry and his wife established a home for destitute children. Humphrey, the wildcatter who discovered oil in Oklahoma, Texas, and Wyoming, and his wife raised two boys who started Denver’s first airfield in Park Hill and became influential in the aviation industry. The mansion is owned and rented out by History Colorado. 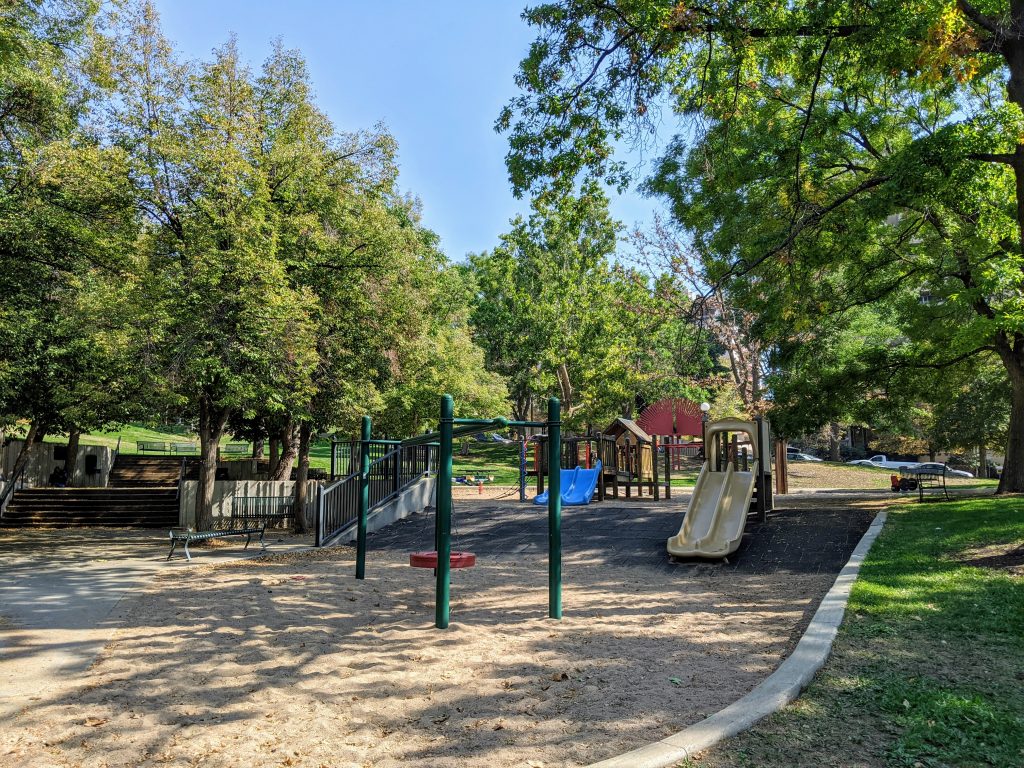 Walk down through Governor’s Park, where you’ll see the names of all the Governors who have served Colorado. At the bottom of the hill is a nice playground for any kids who might be tagging along. At the south end of the park, you’ll see a piece of artwork, “Valedictorian” by Abe Vigil. “Valedictorian”, also known as “Redwood”, is an abstract tree form constructed of wood and metal. In the center of the park, you can find all of the Colorado state governor’s names stamped in concrete.

At the bottom of the hill, turn back up Logan Street to the corner of Logan and 8th. Take a slight detour to the east on 8th Avenue to see the Governor’s Mansion.

The Governor’s Residence at Boettcher Mansion 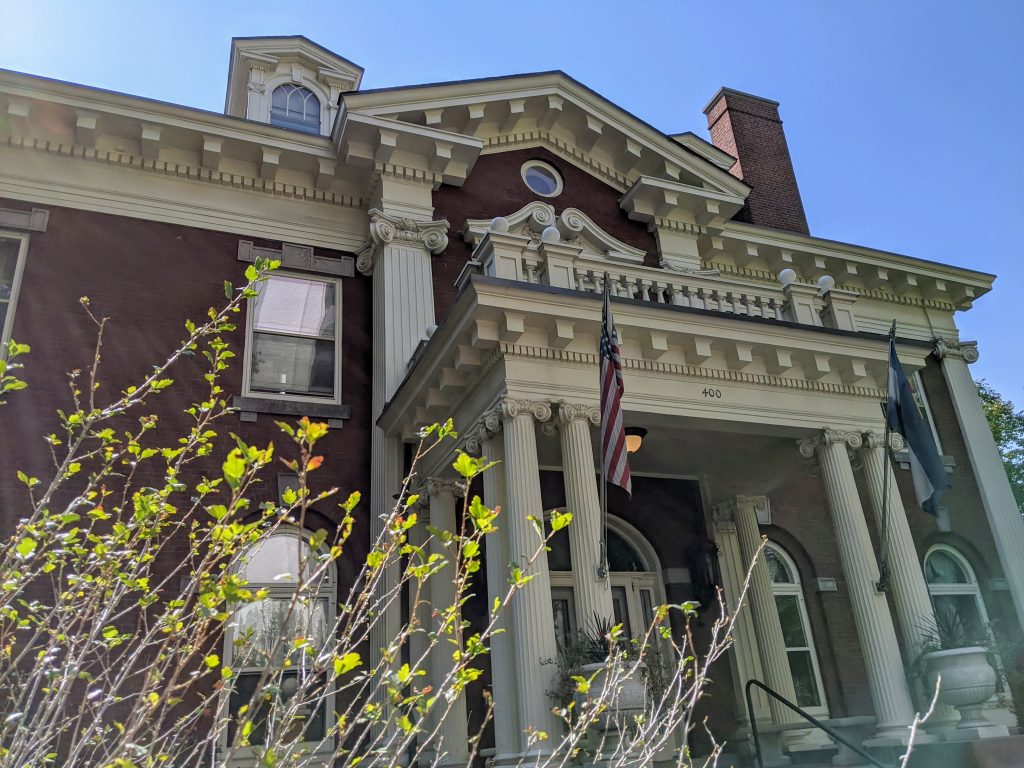 Also known as the Cheesman-Evans-Boettcher Mansion, after its previous owners, the Colorado Governor lives in the Governor’s Mansion, where you can tour for free. Built in 1908 to house two families, Claude Boettcher made his fortune in sugar, livestock, cement, steel, securities, utilities, and transportation. Walter Cheesman succeeded in the world of railroads, finance, real estate, and water industries. And John Evans was the second Governor of the Territory of Colorado and who gave orders regarding the Sand Creek Massacre.

In 1959, the state accepted the mansion as a gift from the Boettcher Foundation, and it’s now used as the Governor’s residence if the Governor so desires. Currently, Governor Polis does not live there. 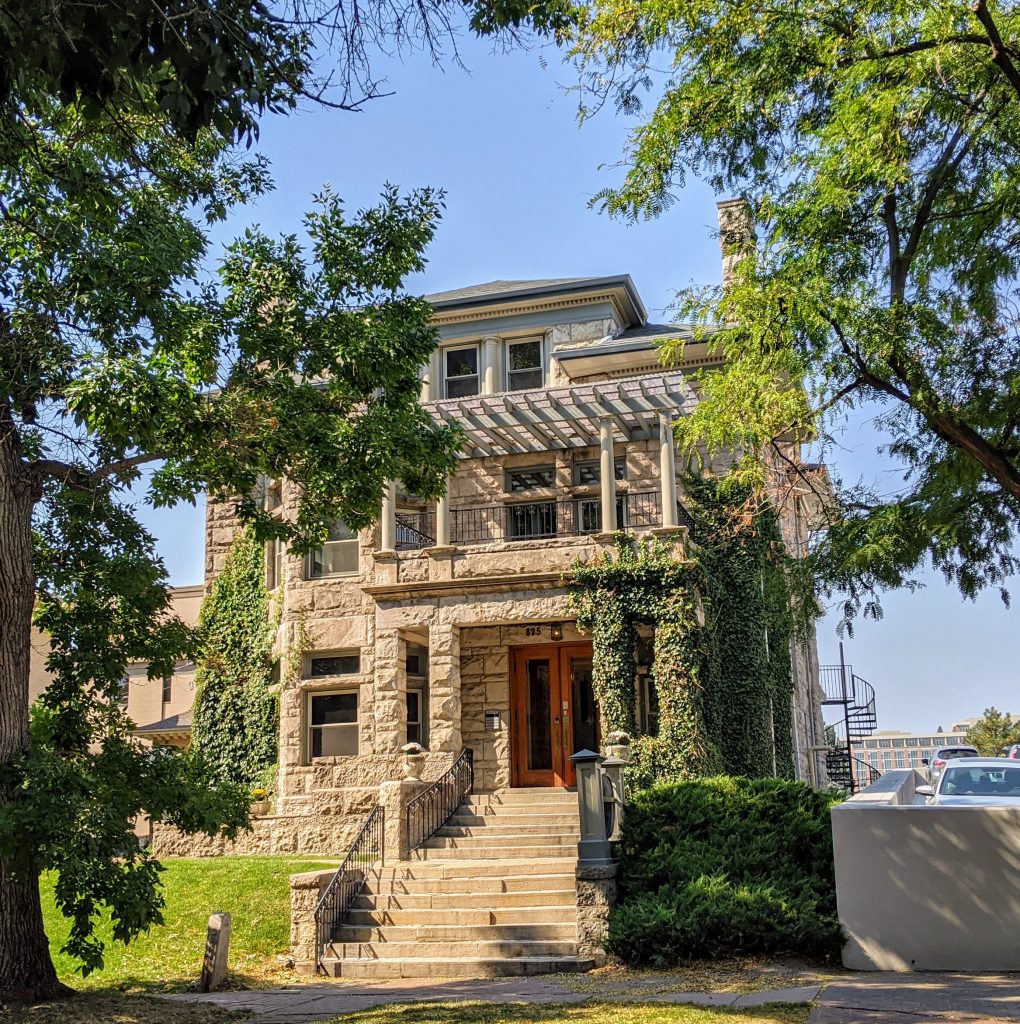 The Brind Mansion at 825 Loan St, built by Joseph Fitz and his wife Mary Evaline Brind, spent $15,000 to build the home in 1895. Brind worked as the general agent for Judson Dynamite & Powder Co. and Western Fuse & Explosives Co. of California. Married multiple times, Joseph was involved in many scandals and often in court. He gave his first wife a famous diamond from Spain, which had never been found. Read about that story here. 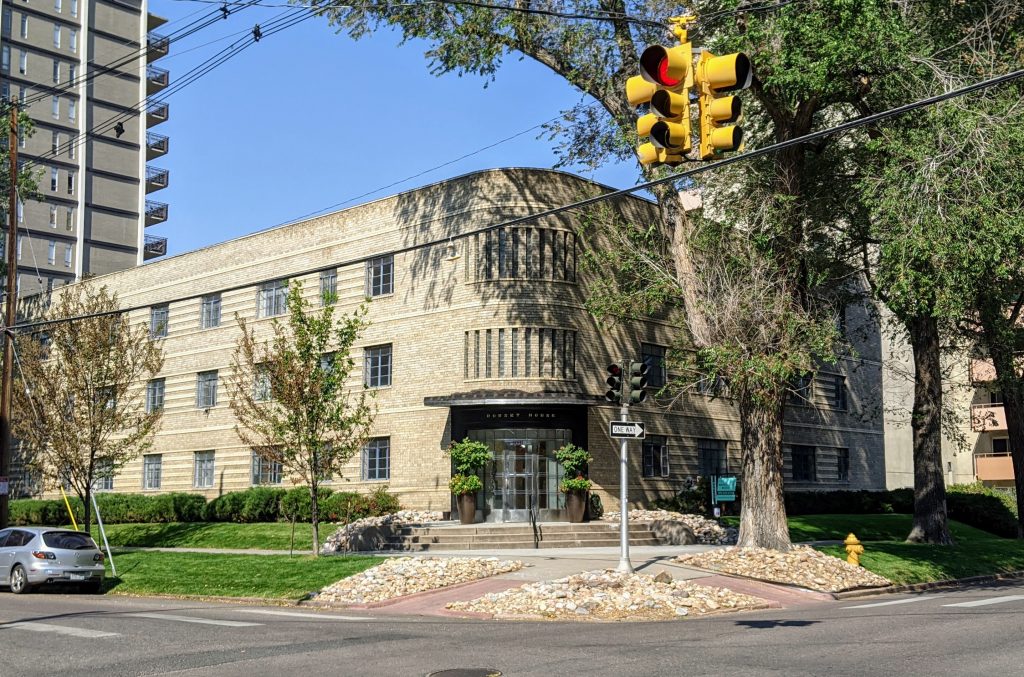 With such grandeur along millionaire’s row in Denver which harnesses the best of architecture from 1890-1910, it’s easy to overlook some newer buildings. The Dorset House has always been apartments and was designed in 1937 by Arthur Axtens, both a registered architect and engineer, who practiced privately in Denver from January 1927 through at least 1957. He specialized in modern styles, like the Streamline Moderne, shown at the Dorset. 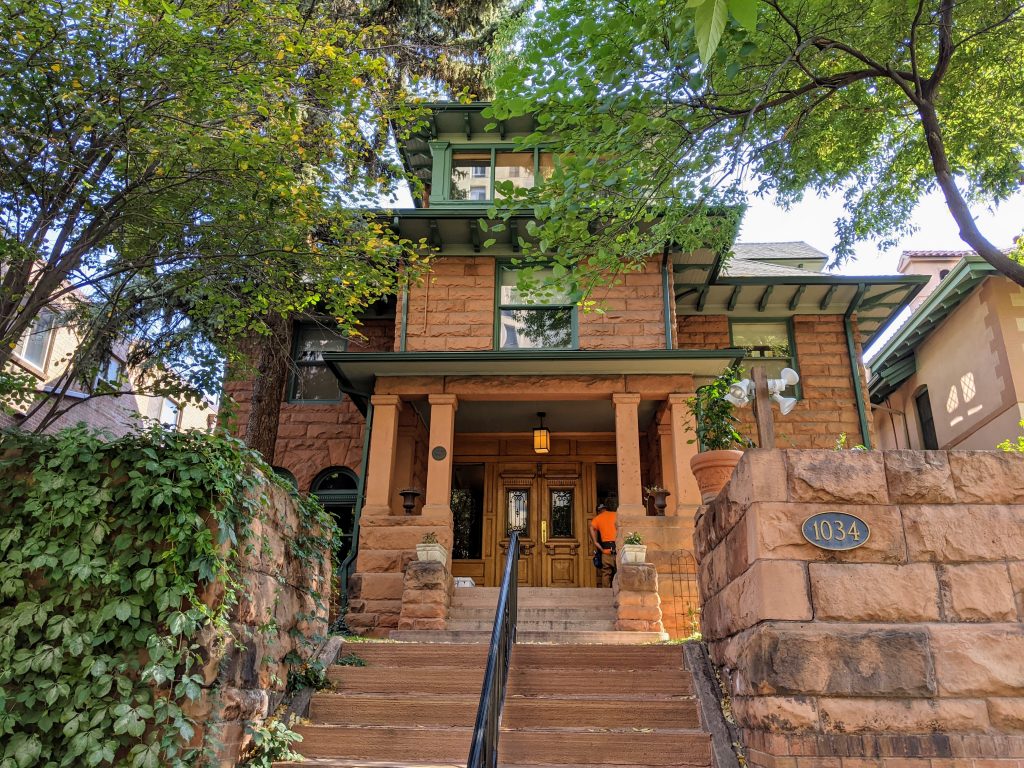 The Daly Mansion at 1034 Logan was built by Thomas Daly. It’s just two stories made of rusticated sandstone. Daly is famous for bringing apartment living to Denver and particularly Capitol Hill. He designed and built The Helene Apartment Building (originally called the Pearl) at 1062 Pearl Street.

Continue walking north on Logan until you reach 12th. Take a right back to Pennsylvania where you started. You can also continue up and down Grant Street as well for more historic homes.

If you’re hungry, a great place to pick up some good food is right down the street at City O City. It’s an all-vegan restaurant, but non-vegans would never know. Try the churrasco cheesesteak. Be sure to stop at the bakery next door, Make Believe Bakery, also all vegan. Their chai cupcake is to die for.

You can now read this article offline and get GPS-guided travel directions to the attractions featured in this article by downloading the GPSmyCity app on iTunes App Store or Google Play.

Additional Walks Near and In Capitol Hill

If you would like to continue walking in Capitol Hill, try these other walks: 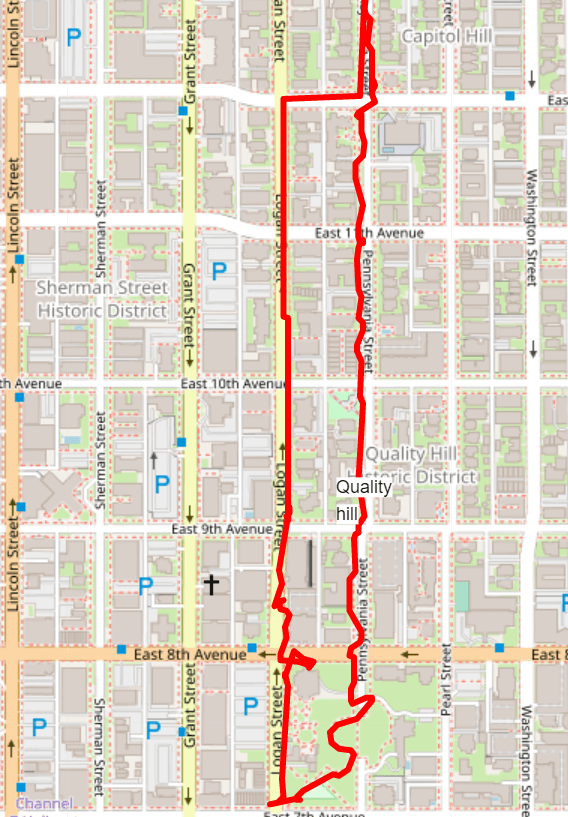