“There’s a sucker born every minute.”

Or so said P.T. Barnum, co-founder of Barnum and Bailey’s Circus.

Walking the Barnum neighborhood brings up the circus owner’s reputation for story telling, fact bending, and all-around tomfoolery. While enjoying Barnum on a Denver neighborhood walk, you’ll uncover all kinds of Barnum evidence, despite the fact that P.T. never lived in his namesake neighborhood. Will you be the person that uncovers real Barnum history, or will you also get fooled?

Save 20.0% on select products from PRIME WATERS SEAFOOD with promo code 20DELISHPW, through 3/18 while supplies last.

Barnum Neighborhood is a rectangle shape from Sheridan to Federal, Alameda to 6th, and includes the two official Denver neighborhoods of West Barnum and Barnum, separated by Perry.

Where Are the Elephants? The City of Denver’s Park and Rec department tries to reflect neighborhood history into its local parks. Barnum is no exception. Playing on the neighborhood name, the city playfully designed a playground around circus animals. So, for this walk, you should start there.

In the playground, which overlooks spectacular views of downtown, you’ll find a bevy of beauties. Embedded in the sand and painted on the playground gear, you’ll stump upon a lion, a gorilla, and a zoo tic-tac-toe in the kids’ playground, and animals to ride in the sand. A poor economy in the West Colfax neighborhood (read about West Colfax) created an opportunity for P.T Barnum. He speculated in 1881 that a 1000-acre tract of foreclosed land would make a luxurious, high-end neighborhood. It never took off. But, Barnum’s daughter, in a scandalous departure from Indiana with her tuberculosis-ridden husband, Dr William Buchtel, hustled to Denver, and purchased the land from her dad for $1. Her dad’s grandiose plans of opulent homes turned into a neighborhood for the working middle class that you see today.

Yet despite four visits by Dad, P.T. never lived in the neighborhood nor did he bring his circus animals. The truth, though, has gone unnoticed by neighborly storytelling. Despite many rumors of the circus animals wintering in Denver and elephants pushing trains uphill, the neighbors have elevated Barnum and his tactics to urban legend.

Along King Street, across from the Bowman-Savio house, you’ll find what neighbors and the current owner call the “Barnum House.” A storyteller named Bart Barnum once lived there, and he concocted decades of stories about the house belonging to Barnum, the pots in the front yard being from Africa, and the property next door being a carriage house for the animals. Well, his true name wasn’t Bart, and the house was built after P.T. died, but who cares? The enigma within the enigma is much more fun than the facts, and you really can get a sense that the red and yellow trim of the house hearken to the big top.

It’s Always about the Kids 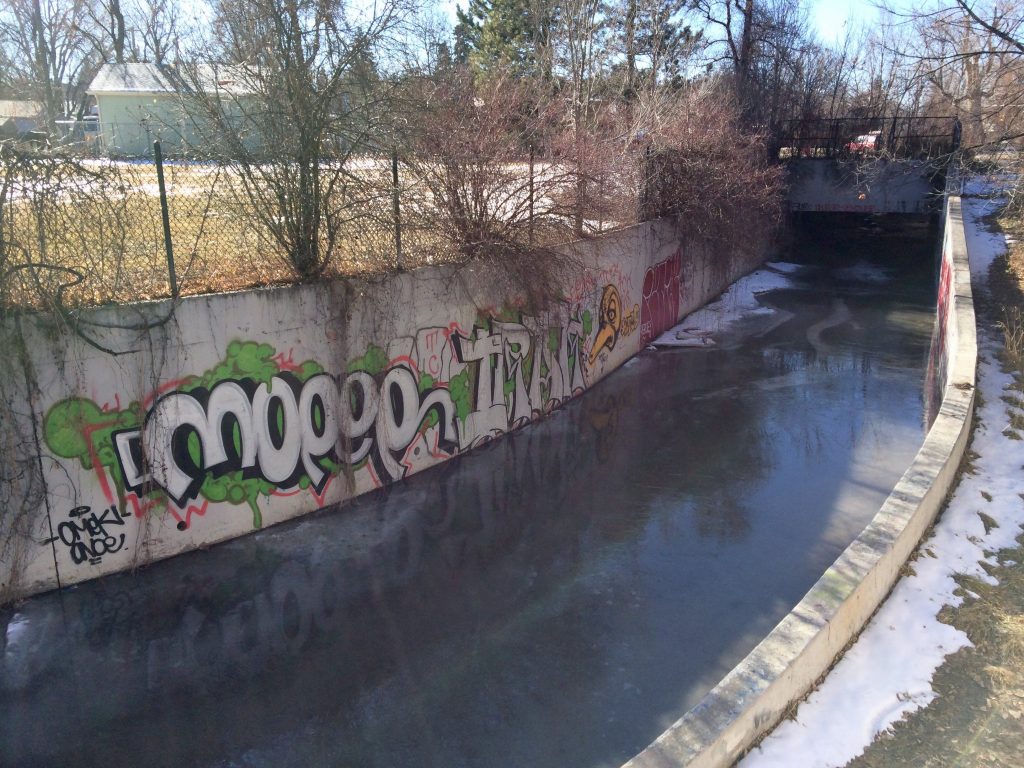 The Weir Gulch cuts diagonally through the neighborhood, offering a quiet meander through Barnum’s alleys and streets. The locals-only Cedar Park at Knox and Cedar, created by community activist April Crumley who wanted a new park and to pay homage to the elephant rumors, welcomes urban gardeners and story tellers to an afternoon sit among its benches. Although the neighborhood never morphed into the luxurious vision held by Barnum, it still created a community. The neighborhood eventually became a working class home to the many workers at the now-closed Denver Ordnance Plant. Currently, it’s one of the hottest, flipping neighborhoods in Denver due to its view, character and proximity to downtown. And in grandiose fashion, Barnum Elementary School sits proudly on Hooker, welcoming the next generation of Barnum story tellers.

On this route, you’ll start at the Rec Center, journey past the “Barnum house,” enjoy the Weir Gulch, pass the community garden, and return to the Rec Center. If you have time, enjoy Barnum Park which has something or everyone. Start at the Barnum Rec Center (360 Hooker St, Denver, CO 80219). Walk up the hill into the park, past the kid’s play area. Notice the gorilla and lion, the animal tic-tac-toe in the playground, and the amazing views of downtown Denver to the east. When ready, head down the hill back along W 4th Ave, moving westerly.

At King Street, take a left. On the right will be the Bowman-Savio house, built in 1910, and what is now an organization for orphans and wayward boys, started in 1966.

To your left at 320 King Street is the “Barnum House.” I was lucky enough for the owner to come out and tell me a story about the house. The first owner claimed he was Barnum’s great grand-son, Bart Barnum. Bart perpetuated the rumors of the house, gave tours as if it were Barnum’s residence, and even claimed the next-door house was the keeper of the circus animals. Although none of that info is true, these two houses, moved here from Villa Park, are quite interesting and imaginative. (Read the fascinating article of this Bart Barnum hoax.)

Continue south on King to the urban garden on the west side of the street. Take a right into the garden, admiring it and the goats in the back right corner. At the alley, turn right, and on 2nd Ave, turn left. Follow 2nd Ave right onto the Weir Gulch trail. Weir Gulch is a tributary to the South Platte and is part of a 5-part plan to revitalize the waterways in the Greenway Foundation and City of Denver’s River Revitalization Plan. Continue along the Gulch until you reach Bannock street. The Gulch will continue to the right, you will take a left on Bannock and walk through the neighborhood.

At Knox, take a right. When you arrive at the corner of Knox and Cedar, take a break in Cedar Park on the NE corner. Here, notice the cement elephant in the center of the park. When the neighborhood organized to put in this park, the kids got into the game by spreading the cement on the re-bar frame. Now owned by Denver Urban Gardens, local Barnumians gather here at the park for markets, camaraderie, and friendliness.